In March of 2012, Shaun Barker’s knee was wrecked in a manner you might think was the result of a high-speed car crash. As the former Derby County captain attempted to clear a cross arriving in the six-yard box, against local rivals Nottingham Forest, his goalkeeper Frankie Fielding came to claim the same ball.

Their freakish collision ruptured every ligament and tendon in Barker’s knee –anterior and posterior cruciate ligaments, lateral and medial collateral ligaments, and patella tendon — and chipped a hole in his tibia the size of a 50 pence piece. Barker’s entire knee joint had to be clunked back in place, as he lay motionless on the pitch. 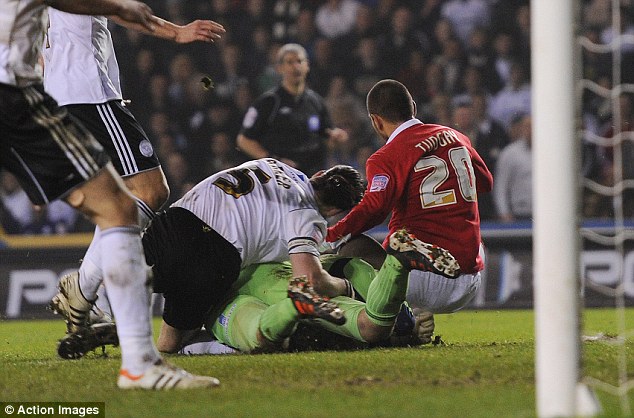 To outsiders, the idea that he would ever return to play professional football again seemed ludicrous. And as time passed, that sentiment only grew.

On Friday night, however, after five operations, 30 aspirations (to drain fluid from his knee), a year without a club or income, a testimonial with Derby County that seemed as though it had surely signalled the end of a long and stubbornly trodden road, Barker proved all of his doubters wrong.

In the 93rd minute, he entered the field of play for Burton Albion in his first competitive appearance for four and a half years, in a 1-0 victory over their closest neighbours — you guessed it — Derby County.

A further note of poignancy is the fact that Burton Albion’s manager, Nigel Clough, also Barker’s boss at Derby, clearly holds great affection for his former captain. Friday’s win is also the first time Clough has faced Derby since they sacked him in 2013.

Just before Barker came on he asked the man he has seen as his “Gaffer” throughout it all: “You want me to pick up? He said: ‘No, just head the ball. The ball’s gonna come into the box; just head it, that’s all I want you to do.’ I came on and they won a corner; Scott Carson was up, we were overloaded by two. The lads were screaming at me to pick up and I said ‘no I’m just gonna stand here head the ball.’ The ball came in and I headed it away. I think he (Clough) wanted that moment for me. And maybe for him a little bit as well.”

What Barker has done is an extraordinary feat of perseverance, resilience and belief. Looking back on the devastating moment that left his career, and knee, hanging by a thread, he said: “I heard a snap, and a shooting pain went straight through my body. I thought I’d broken my leg in two. I heard a few lads screaming to the physio, so I knew my leg didn’t look great. I was looking into the Forest end in front of me and all their fans were laughing and jeering; Derby County captain, lying there…”

Derby’s physio Neil Sullivan said the moment surgeon Andy Williams opened up his knee and saw the full extent of the damage, he took a step back and shook his head in disbelief. Incredibly, though, Barker was told he could be back playing in 18 months to two years.

There were eight days in hospital and more morphine than he can remember following his surgery. Then came a month sleeping on his living room floor and peeing into a bucket because he couldn’t get upstairs to the only bathroom in their house.

For the next three months he spent 12 hours a day enduring the monotony of a CPM (Continuous Passive Motion) machine slowly bending his knee back and forth. But the pain of any movement beyond 20 degrees was agonising. Two operations to remove inflammation were followed by two more to take out some of the “12 or 13 screws and bolts” in his knee, as well as some torn cartilage.

On one occasion he wanted a bath. But when it came to getting himself out he and his wife Bec were stumped. She eventually pulled the plug on the cold water, and before one final heave finally freed him, she seriously considered throwing a duvet over him and leaving him for the night.

A trip to Philadelphia to visit a leading rehabilitation coach called Bill Knowles did provide a moment of humour. When he arrived at the clinic the first thing he was asked to do was summersaults and roly-polys in a soft play area. “I thought, ‘this is a wind up!’ But I soon realised it was to make me see how much I relied on my other leg to stand up, roll, basic movements… I was like a monkey over there; every time we saw someone he would say, ‘come and look at this guy…’”

The swelling in his knee was a constant battle and the largest aspiration was 120ml – or “five or six big fat syringes”. “I remember once I went to London to get one done, and by the time I’d got back home to Derby, a two hour drive, it had all filled back up again! I couldn’t stand up for ten minutes without my knee flaring up. After every single thing I did I had to sit down and ice my knee. Your whole life changes because of that. I couldn’t do anything with my wife or kids.”

A trip to Dusseldorf in Germany for a procedure called orthokine provided a breakthrough, two years down the line. The five-day treatment involves removing, manipulating and reintroducing blood as an anti-inflammatory and has been used by athletes such as the basketball star, Kobi Bryant. “It changed my life,” Barker said.

Six months later he played an emotional first game for Derby’s Under-21s and his recovery began to pick up pace. He played some part in six Under-21 games in all, two of them for League One Sheffield United, by then managed by Nigel Clough, who has supported him every step of the way.

Derby County’s belief that he could return to their level left with Clough. He was released in May of 2015, just as a foot problem thrown up by the imbalance in his body turned out to be a torn plantar fascia. Perhaps unsurprisingly, not many clubs were looking for a 33 year-old centre half with no appearances in three years, a damaged foot and a reconstructed knee.

If there was any moment to give up, among many, surely it was then? “Unless you know me personally and are involved in my environment, I can understand that 95% of people wouldn’t believe I’d play again; why would they? Fans would tell me I wasn’t going to play again; sometimes they think they can say what they want to you. But the vast majority were involved with my journey and I think my belief was infectious.”

His wife Bec says he was down twice, for about half an hour each time, in four and a half years. It certainly seems his belief was infectious and that man Clough came to his aid once more in March, offering him treatment and a place to get fit, at Burton Albion.

“I don’t think there’s many people like Nigel left in the game,” he said. “It’s not just about football for him, it’s about characters; it’s about how people are, whether you can trust them… When I came on the other night I thought, ‘yeah this is what I’ve missed…’ Those last ten minutes of games when you’re 1-0 up, and you’ve got to hold strong, that’s when I grow and enjoy football the most. I think the Gaffer knows that; he knows he can throw me on to head the ball.”

On Friday Barker wore the same boots as he had on the night his career was derailed. He also wore them in his first Under-21 game and his testimonial at the iPro, but now they will be boxed up and kept as a token of the journey he’s been on. At 34 in September, he says he feels like he is starting all over again.

“Having that 90 seconds was the thing that I needed and wanted more than anything; to get that was remarkable for me and kind of like the end of a journey, and now a new one begins. It’s about proving myself again now. This has made me content but it’s not made me happy.”